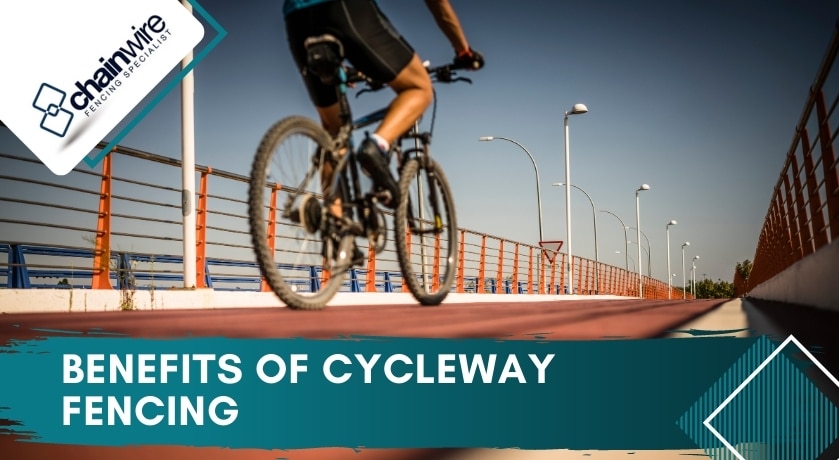 Learn the advantages of installing cycleway fencing in your community.

Cycling can either be relaxing or challenging. You can ride leisurely along parks with a flat surface, or you can cycle on rugged terrains to push your fitness potential. Whatever track you decide to take on, it is important to always think about your safety and that of the people around you.

Helmets and other protective gears will help to keep you safe, so don’t leave home without them. There are also facilities built to lessen, if not prevent, road accidents and injuries. Cycleway fencing is one such provision and although there are times when accidents just can’t be avoided, it’s been built to keep everyone away from harm..

According to a report from the National Road Safety Strategy, only road deaths involving cyclists have increased year on year for the past decade. In the 12 months to August 2020, a total of 50 cyclists lost their lives on Australian roads, compared to 39 deaths in the previous year. This is an increase of more than 28 per cent. Between the baseline (the average number from 2008 to 2010) and August 2020, cyclist deaths on the road showed an increase of 56.3 per cent.

What are the Benefits of Cycleway Fencing?

The barrier fence you see along the cycleway is there to keep cyclists as well as pedestrians and bystanders safe. Here are the benefits of having these fences installed on bike paths.

In areas of high-speed traffic and busy streets, barriers or fences are key to keeping cyclists, pedestrians and motorists safe. They make sure that each of these road users is able to stick to their own portion of the road. Cyclists can stay on their track without worrying about getting sideswiped by fast-moving cars. They can also refrain from ramming into unsuspecting pedestrians or kids playing nearby.

2. An effective barrier against vertical drops

Cycleway fencing protects cyclists from going over large vertical drops or steep batters. A vertical drop of less than two metres will require a partial barrier, while those exceeding two metres will need a full barrier fence. It is also essential in areas where a bridge, culvert or hazard exists on a path.

3. Keeps you off waterways

While lakes, oceans, rivers and streams may be wonderful to look at, riding straight into them, especially unintentionally, is no fun. It may even be dangerous and fatal. Barriers help keep you on the track quite literally, so you can reach your destination in one piece.  A full barrier fence may be required if a vertical drop to water exists within 5 metres of a path.

Fences along cycleways prevent riders from veering off the track. However, certain factors need to be considered to make sure cyclists don’t get hurt because of the fence itself. Here are some of the things to take into consideration when designing and constructing barrier fences.

1. The various elements of the fence, including railings and posts, should minimise the possibility of cyclists snagging their clothes, pedals, handlebars or brake levers on the barrier. Low fences are hazardous at pedalling level and must be avoided.

2. Fences should be designed and constructed to avoid spearing injuries when hit either by a motor vehicle or a bike. Their ends should be at least one metre away from the riding track, a safe enough clearance even for speeding cyclists.

3. Visibility is essential, especially in the dark. Therefore, barrier fences should be of a light colour and marked by highly visible signs and reflective tape.

4. Fence railing must not have splinters, burrs, rough or sharp edges or surfaces. Steel is the material of choice for these fences, and longitudinal construction with rounded posts and smooth railings are preferred.

5. Bollards or fences that curve towards the cyclist must be avoided. These can cause serious injuries when a rider loses control of the bike and hit the barrier.

6. A fence barrier must be 1.4 metres high. This should prevent a cyclist from rushing into a ravine or body of water, or hurling into speeding cars. A 1.2-metre fence is used when the severity of the hazard is relatively low. A higher fencing system should be considered where it is protecting cyclists from very severe hazards.

7. The following types of fences should not be used within 1 metre of bike paths:

8. All designs and installation of barrier fences on cycleways must adhere to Austroads Guide to Road Design Part 6A: Paths for Walking and Cycling.

Get in Touch With a Fencing Expert

Chainwire Fencing Specialists has an experienced team of fence fabricators and installers. Our products include cost-effective temporary fencing, powder-coated aluminium fences and heavy-duty galvanised steel fencing, and we have a dedicated workshop in NSW that is ready for large-scale fencing production. We would be happy to provide you with a free estimate on your next project. Contact us today to speak with a representative.

Pros and Cons of Electronic Gates
Types of Fencing Brackets