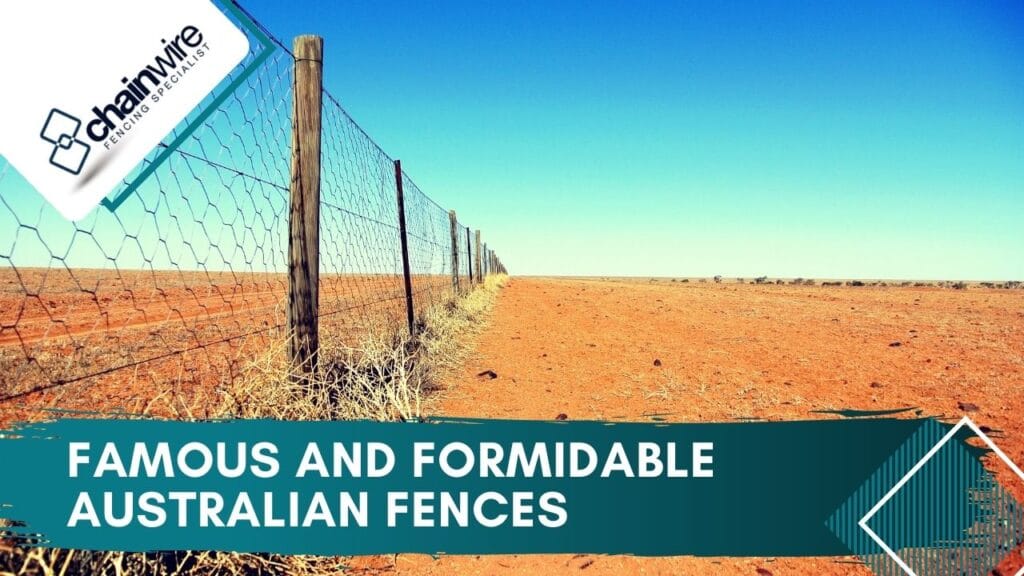 Fencing installations that have stood the test of time

Fences and similar land barriers have been around for thousands of years. All over the world, fencing has been built to safeguard livestock, protect property, and reinforce landscapes.

As fencing materials and technologies have improved, many of these property boundaries have seen upgrades and replacements – there are even world-famous fencing installations that continue to stand the test of time. And three of them can be found right here in Australia.

The Dingo Fence is an Australian landmark. Considered the longest true fence in the world, it measures 5,614 km, stretching across three states.  It runs from Surfer’s Paradise in Darling Downs, Queensland all the way to the cliffs of the Nullarbor Plain above the Great Australian Bight. Part of the structure is 150 kilometres of fencing that traverses the red sand dunes of the Strzelecki Desert.

For those who are mathematically challenged, imagine this. The dingo fence is 3 times the length of the Great Wall of China. It is so long that it can connect London to New York, and it would take 6 months to walk both ways.

The dingo fence began construction in 1859 to separate the populous, fertile south-eastern part of Australia – where Melbourne and Sydney are located – from the harsh and dry outback. It was completed in 1885 and then fortified in the early 1900s.

Australia’s dingo fence is embedded into the ground with wooden posts, connected by 1.8m high wire mesh. Some sections in South Australia have a multi-strand electric fence.

Much of the fence is lit at night by red and white CFLs and patrolled by 23 full-time employees. Every year, the government spends nearly $750,000 to maintain the dingo fence.

What was the Dingo Fence built for?

As the name suggests, the dingo fence was built to stop dingoes, Australia’s largest terrestrial predator, who was a constant threat to the flocks of sheep grazing in the fertile land of southern Queensland.

Once the fence was built, farmers and ranchers saw much fewer dingo attacks, which allowed their sheep to grow in number.

Since it was established in the early 20th century, the dingo fence has served South Australia well, but it’s not 100% effective. Dingoes do get through, and sometimes even wild camels crash into the fence. The outback is home to the world’s largest camel herd – another out-of-control, invasive species brought to Australia by well-meaning settlers.

The downside of the Dingo Fence

Once the dingoes left the area, the kangaroo population grew in large numbers. This has led to kangaroos and sheep now competing for the sparse grazing land on the fence perimeter.

What was once a single ecosystem has been divided by the world’s longest fence. With sheep, kangaroos, emus, and other dingo prey all staying on the dingo-free side, there has been much less biodiversity of small mammals and greenery as these species compete for grazing land.

On the side of the fence where dingoes are rare, there is less grass cover between sand dunes, which has had critical effects on the ecosystem of the region.

According to experts, you can even see this nature imbalance from space – satellite imagery shows the effects of predators on vegetation on an enormous scale.

Before dingoes became a problem, long fencing had been built in Western Australia to deal with another pest – the out-of-control rabbit population.

When British ships arrived to establish the first European settlements in Australia, they brought with them caged rabbits for food. These fluffy small mammals started to become a problem by October 1859 when Thomas Austin brought 24 rabbits from England and released them into the wild for hunting purposes.

From those 24 rabbits, the hare population exploded and grew to 600 million. By the 1860s, the rabbits had bred into a strain that was difficult to control. They began destroying crops all over the continent, outsmarting farmers by jumping over flimsy fencing installations.

In 1907, Western Australia constructed a, 1,833-kilometre wire fence running from north to south to keep the bunny outbreak at bay. At the time of its construction, the Rabbit-Proof Fence was the world’s longest unbroken fence.

The Rabbit-Proof Fence is now called the State Barrier Fence of Western Australia, which is connected to the State Vermin Fence and the Emu Fence. All three are pest-exclusion fences constructed between 1901 and 1907 to keep agricultural pests away from Western Australian grazing land.

The Western Australia fencing installation took 65 years to build, with each kilometre of fence costing $250 (equivalent to $18,906 in 2018) at that time.

Once completed, all three fences reached a total of 3,256 km.

The Darling Downs-Moreton Rabbit Board Fence

In 1997, the final segment of the Rabbit Board Fence was connected to the Dingo Fence – extending from Mount Gipps to Goombi, between Chinchilla and Miles.

As of 2010, approximately 530 km of the fence, along the border of New South Wales from the Lamington Plateau to Cottonvale, was being actively patrolled and upgraded. By 2021, the Darling Downs-Moreton Rabbit Board Fence had been expanded to 555 km of rabbit-proof fencing.

Throughout history, fencing installations have performed two roles: To mark property and to protect property. In residential applications, the rear fencing is often higher as it needs to protect the property from intruders, while the front fencing is often a stylish way to delineate the perimeter.

Even if the fencing is low enough to climb over, it is still a powerful symbol that a line should not be crossed. Someone else’s property lies beyond the fence, which is off-limits to outsiders.

Chainwire Fencing Specialist is the premier chainwire fencing specialist in New South Wales. We have poured years of experience into every installation. So, whether the project requires heavy-duty fencing to keep stray animals or intruders away, or a simple backyard fencing to mark your property’s borders, trust Chainwire Fencing Specialist to the job to your standards and beyond.

Reach out to us for your fencing needs in Central Coast, Newcastle and the Hunter Valley. Call us today on 40235416 or email us at admin@chainwire-fencing.com. Alternatively click here to send us an online message and we will get back to you as soon as possible.