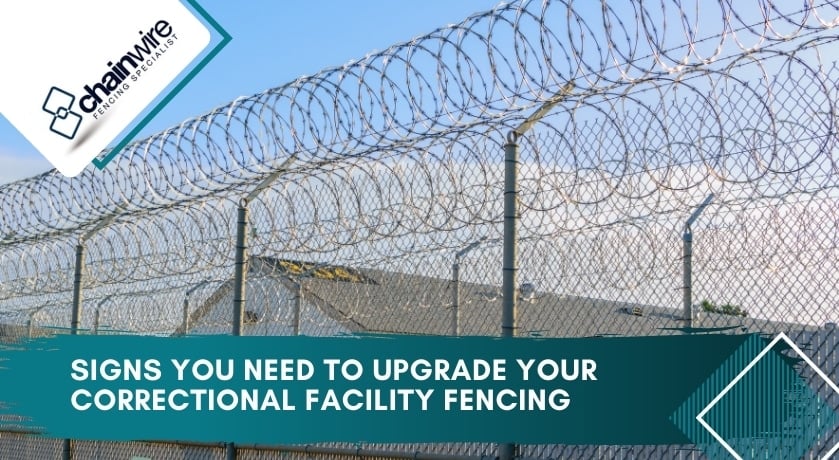 The low figures do not mean that you can be complacent. If you run or operate a correctional facility, you must continuously be on guard to prevent these figures from rising. The correct maintenance of the fencing is one of the ways to do so. Below are signs you should look out for to consider upgrading the fence in the facility.

1.  There is an increase in the risk of the inmates held in the facility.

The UN Technical Guide for Prison Planning states that a prison is normally enclosed with walls and fences. The type of enclosure depends on the risk level that the prisoners impose on public and prison security.

As the risk increases, the amount of physical enclosure needed also increases. Correctional facilities with high-risk prisoners usually have internal fences to control movement. This will also designate areas for different activities such as education, work, and administration.

It is crucial to assess the risk level of prisoners from time to time. Once there is an increase in risk level, upgrading security features such as the fence is necessary.

You can also assess the escape risk of the prisoner by considering the following:

2.  The fence can be penetrated by cutting tools.

In an escape attempt in Acacia Prison, a medium-security jail in 2013, investigations showed that the prisoners cut a huge hoke in the fence to try to escape. The Prison Officers Union commented that this act would have taken a long period of time.

The fence needs to be upgraded so that it will be resistant to penetration using normal cutting tools. There are basic specifications for perimeter fencing materials that need to be followed:

A case study done in two Western Australian prisons explored this dilemma. They tried to use wires with strong tensile property to increase resistance.

3.  Prisoners can find a way to climb over the fence.

In July 2018, ten prisoners broke out of Greenough Regional Prison, 400km north of Perth. Taking advantage of a riot that occurred on the premises, the ten medium-security inmates utilised ladders to get out of jail.

The 1990 Standard Guidelines for Prison Facilities in Australia and New Zealand recommended features of the prison security system. This includes:

When inmates can use simple equipment like ladders to escape, it is time to consider a fence upgrade.

4.  Different types of people have access to the correctional facility.

Prison administrators and staff can’t be in several places at once. Security is at risk once the inmate population and visitors increase. Upgrading the fence is one way to control the movement of the inmates and visitors in the facility. Electronic access gates can be used to prevent people from easily getting inside or outside.

5.  Several years have passed since the fence was first built.

The prison security welded fence is built from mild or stainless steel. Stainless steel is the strongest of metals. Its mechanical properties make it extremely resistant to rust. Unfortunately, corrosion still cannot be precluded.

Stainless steel has a chromium oxide layer that self-repairs the metal when broken or breached. If the damage is extensive, corrosion will occur. Here are some common types of corrosion to look out for:

Pitting corrosion occurs when chemical species attack the passive layer of stainless steel. The most common is chloride ion, found in salt and bleach. This can also be due to exposure to high temperature for a long period of time.

Unlike alloy steel and ordinary carbon, stainless steel does not rust uniformly. Some chemicals like acids uniformly attack the passive layer depending on the temperature and concentration. General corrosion is quite destructive and occurs at the whole surface at once.

Some manufacturers also galvanise and coat the surface with PVC. Stainless steel can last up to 50 years; however, this may shorten because of constant exposure to the elements over time. Getting an upgrade is an effective way to control damage and avoid bigger expenses.

Find the right balance in upgrading the prison fence

Any upgrade to be done in the correctional facility should be reviewed carefully before implementation. There should be a balance between achieving the correct security level and respecting the dignity of the individual. Anything that may cause harm or invade privacy should be rejected.

A regular fence is not enough for security in some scenarios, especially in correctional facilities. Don’t neglect the signs you see that it is already time for a fence upgrade. Chainwire Fencing Specialists offer high-security fencing that has adequate containment and control for a correctional facility.

We can install additional features such as electronic access gates, alarmed gates, and electrical fencing. Give us a call today and let us know how we can help.